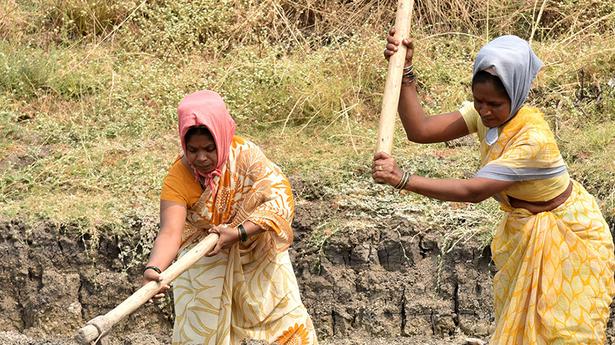 The Monitoring Center for Indian Economy (CMIE) reported that the labor force participation rate for rural women was 9.92% in March 2022, compared to 67.24% for men. This is cause for concern. According to the CMIE, millions of people who have left the labor market have stopped looking for a job “perhaps [because they were] too disappointed in their inability to find a job and convinced that there were no jobs available”. In countries like the United States, Canada and Australia, those workers who want to work but give up looking for work for various reasons are called “discouraged workers” and they are included in the category of unemployed. This phenomenon, which is not taken into account in India by any official labor force survey, is wrongly described as a “dropout” or an “exit from the labor market” of women, giving the impression that it is acts of a choice made by them, when in reality, women are expelled from employment. CMIE is providing valuable inputs for urgent government intervention in rural India.

The realities on the ground are worse than the CMIE suggests and the government denies. Women who come from landless households or with meager land holdings cannot afford the luxury of being ‘discouraged’. These are the “compulsory” workers.

The depths of distress


The Mahatma Gandhi National Rural Employment Guarantee Act (MGNREGA) sites are probably the best places to understand the constraints of millions of women to work. A particular project in Kalaburagi district focuses on the creation of more than 200 percolation ponds, which are designed to cope with falling groundwater levels and to help recharge wells. This project provides a few days of work to about 300 workers from four villages. The ground is hard and dry and the project extends over several kilometres. The women, who are more numerous than the men, work in exclusively female pairs. They dig and lift mud. In the scorching heat, they have to dig a 10X10X1 tank in one day. An assistant to the officer in charge estimated that as the ground was hard and stony, it would mean digging and lifting around 3,000 kg of mud a day. Since most of these women are unable to perform this task, they do not receive the piece rate of ₹309; they only get ₹280 to ₹285. There was no crèche on site. There was no water, so the women took turns walking a kilometer to a water source to fill their two-liter bottles. They said their limbs were hurting them. Many said they felt dizzy.

But despite the harsh conditions, each worker at the site complained of having only about 40 working days a year. They wanted more because they see MGNREGA’s work as their saviour. The fact that they want to do more of this drudgery reveals the depth of the plight of poor rural households.

During the agricultural season, all the women worked on other people’s land, earning about the same as at the MGNREGA site. But the mechanization of agricultural operations has drastically reduced working days to less than three months a year. Many women then become part-time construction workers. They are hired by a network of “departments” working for contractors. They migrate to the construction sites for a few months, with their families or with other women from the village. None of them I had met had registered as construction workers. They were therefore not entitled to statutory benefits from the Construction Workers’ Welfare Board. On a construction site, each of them carried a minimum of 1,000 bricks a day, weighing two kilos each, or other heavy building materials, often climbing to the first or second floor with this load. They were paid ₹300 per day, less than the men.

When manual or construction work is not available, women find other work. Some of them make twig baskets and brooms. They walk from village to village, often 25 km a day, to sell the baskets. It takes two days to make 10 baskets for which they earn ₹10 per basket. Some women provide services such as cleaning or do odd jobs for landowning families an average of three or four days a month. Some do sewing. They also do their own housework. Thus, based on anecdotal evidence of women at a MGNREGA site, an individual woman in a year is an MGNREGA worker, agricultural worker, construction worker, migrant worker, self-employed street vendor, a seamstress, a domestic worker with odd jobs and a housewife doing multiple household chores.

The work of the “compulsory” worker never stops. Siddhama, a 45-year-old mother of four from Yadgiri District, stretched out her arms and said, “My working arms…this is the property I have, to earn money for my family survives. When I work, they eat.

High commodity prices have led to a considerable reduction in the consumption of vegetables and pulses among women. To prove their point, some of the women on the construction site brought out their lunch boxes, which contained rice or rotis and a chilli chutney. Two sisters, Sheelawati and Chandramma, said, “We drink water after eating the chilli chutney. Then we are not hungry. Others nodded in agreement. They said the 10 kg of grain per head of the central and state government’s free food grain program was a big help and feared it might end. The food deprivation that women face due to high prices and low incomes is another dimension of the life of the “compulsory” worker.


Almost all of the women spoke of being trapped in debt. What women earn from multitasking for which there is no fixed piece rate is by no means equal to the amount of work they do. The dismantling of labor laws in urban areas has weakened labor departments. The implementation of the minimum wage in rural India is only conceivable with strong movements of agricultural workers’ unions. While there should be strict enforcement of the minimum wage with piece rates set for different types of female labor, it is unfair that landless manual laborers in rural India are denied the pitiful annual cash transfer from the government of ₹6,000 granted to farmer owners. While rural workers should also be entitled to a similar cash transfer, the rate schedule for women in MGNREGA projects based on incredibly high productivity rates must be lowered and work sites made more worker-friendly.

With the deep penetration of capitalist processes in rural India, there is a crisis of livelihood options. Poor women adopt various coping strategies. To make a correct analysis of this crisis requires a sensitive lens. The invisibility of women’s work can be addressed through time-use surveys. Village-level time-use surveys by the Foundation for Agrarian Studies, for example, have revealed the extent of women’s work. In fact, widespread surveys of poor rural women and how they spend their time are urgently needed. The ‘compulsory’ worker must be recognized and protected with laws and policies that address her issues as India celebrates the 75th anniversary of its independence.

Splitwise app is great for splitting the bill, but it can’t fix human nature | Imogen West-Knights