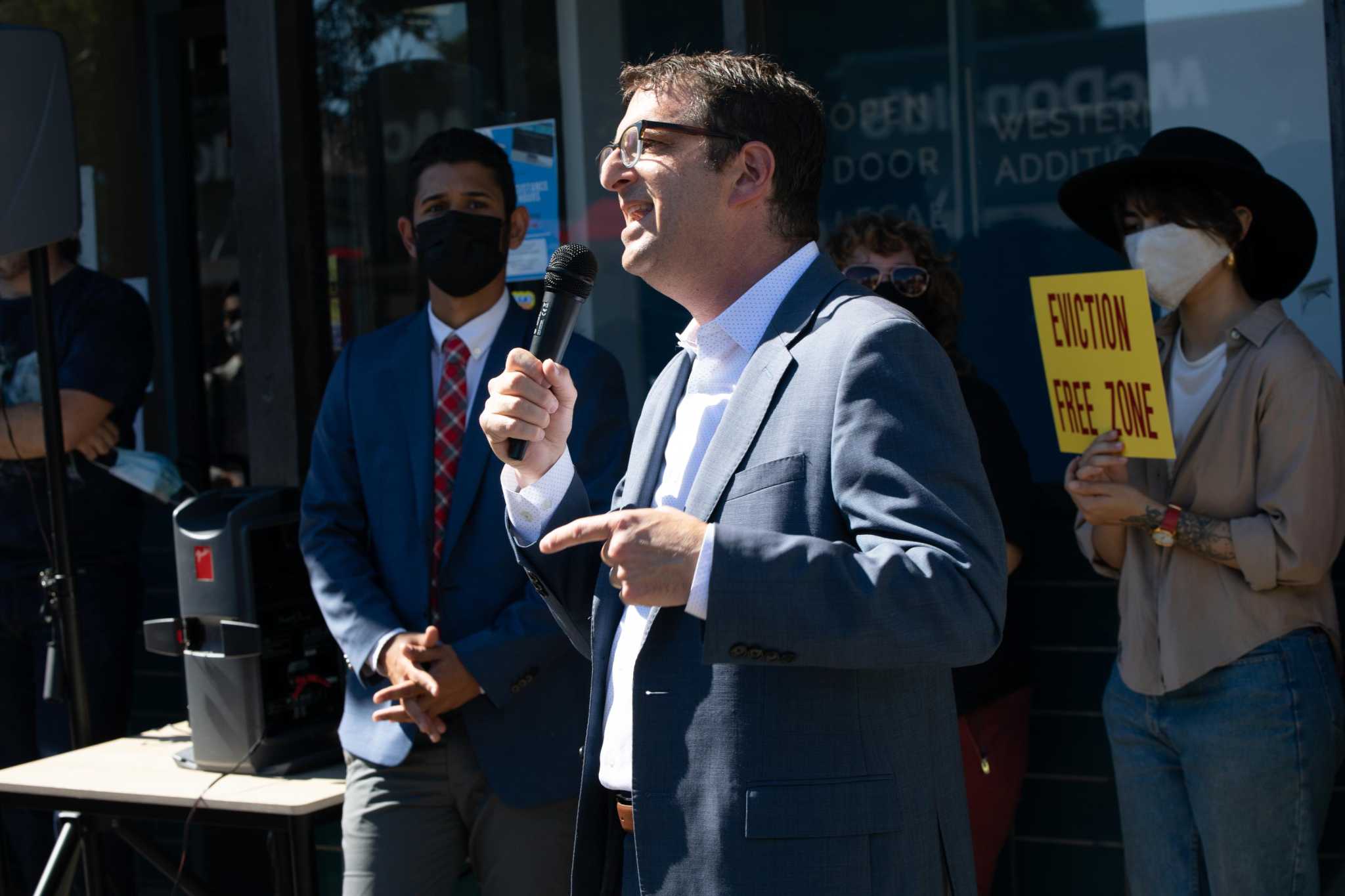 As San Francisco grapples with its affordable housing crisis, a majority of the watchdog wants to spend big on a way to keep residents at risk of displacement housed.

Supervisor Dean Preston is leading the effort to invest $ 64 million in an existing program that helps nonprofits buy small apartment buildings where residents are at risk of moving. Preston estimates that this could help with the purchase of at least 200 units.

The board would withdraw money from a COVID-19 reserve of nearly $ 294 million – filled with funds to fill any future budget shortfalls caused by a pandemic – to be spent on the plan.

Supervisors and their allies, including residents facing eviction, gathered outside city hall on Wednesday before a budget committee passed the proposal to the full council for a vote after Thanksgiving. Seven supervisors support it, although it takes eight to pass the extra budget. The Mayor of London Breed opposes the plan.

The standoff reflects an ongoing debate over how to spend the money voted on by voters and how best to tackle the city’s affordable housing crisis. A majority of supervisors, who were recently criticized for voting against a market-priced housing proposal with a few affordable units, are now rallying to the plan.

Under the Small Venues Program, the city subsidizes about half the cost for a nonprofit to purchase a small apartment building where residents face relocation, such as a landlord moving in or invoking the Ellis Act to remove. the rental market building. Since the launch of the program in 2014, it has subsidized the purchase of 47 buildings with more than 368 residential units and 34 commercial spaces.

Advocates have argued that the program is an underfunded but essential initiative that quickly preserves existing affordable housing. They say there is an urgent need to support tenants facing economic pressure from the pandemic.

â€œThis is an unprecedented opportunity to develop this anti-displacement and affordable housing tool, and we must seize this opportunity not in the future, but now, before we lose more of our neighbors,â€ said Preston.

As of Wednesday, four supervisors – Catherine Stefani, Rafael Mandelman, Ahsha Safai and Myrna Melgar – were not yet on board, although Melgar and Safai said they supported the program in general.

Safai said he feared withdrawing such a large amount of money from COVID-19 reserves given the city’s uncertain economic future. He is also concerned about the ability of the program and its nonprofit partners to quickly purchase buildings.

Melgar said the program needs to be reformed to make it more effective and is working with the mayor’s office to do so, but has yet to decide how she will vote on the proposal.

Mandelman said he was frustrated that whenever he approached town and nonprofits to purchase property for the program, he was told the cost was too high or that tenants were earning too much. His district has the second highest number of Ellis Law evictions in the city.

â€œThe small sites program hasn’t worked for me or my constituents,â€ Mandelman said. “There’s no question that part of the solution is to get more money into the fund, but I’m not thrilled to be massively expanding a program that has done very little for the people I represent.”

The mayor’s office for housing and community development, which manages the program, has commissioned a study to recommend reforms, which is not yet complete.

â€œNo one is saying that the program is perfect and does not need adjustments … but there was no rush around it. Partly because there is no money in the program. funds to buy a lot of these buildings, â€Preston said.

Preston justifies the spending by citing the windfall of the city’s property transfer tax Proposal I, which voters approved in 2020.

There is no plan to fill the COVID-19 pool that would fund this measure, but the city has a total of $ 1 billion in reserves, the comptroller’s office said.

The move follows a year-long political struggle over how to use tax money from the city’s most expensive building sales. Preston and others campaigned for it to be used for affordable housing and rent relief, but Breed rebuffed the fact that the ballot measure was a general tax, meaning it can be used at any end.

Prop. I made nearly $ 63 million last year and $ 82 million so far this year, according to the city comptroller. The office estimated the city could spend around $ 210 million in revenue this fiscal year and next.

The mayor and the board have agreed to allocate $ 32 million for rent relief in this year’s budget. The council has allocated an additional $ 10 million for affordable housing, which has yet to be hit. A committee overseeing how the funds are spent recommended in October that all income from the Prop. I of this exercise be used for the small sites program.

Breed “does not support raids on our emergency reserves for this purpose,” spokesman Andy Lynch said in a statement Wednesday. She said the small venues program does not have the capacity to move funding until the end of the fiscal year, so â€œif it is appropriate it will probably not be spent until the budget for the year is passed. next “.

Lynch said Breed wanted to wait for the report on the program before making decisions about future funding.

The program also targets buildings where two-thirds of tenants have incomes at maximum 80% of the region’s median income, which can sometimes exclude very low-income tenants, Melgar said. And there is an expensive and time-consuming city approval process to market and then fill empty units, said Karoleen Feng, director of community real estate at the Mission Economic Development Agency.

The city facilitated only one purchase last year, Safai said. The mayor’s office of housing and community development, Eric Shaw, told supervisors the office is currently prioritizing investment in existing properties, not acquisitions. He said staff turnover and capacity were issues.

Residents facing eviction believe that extending the existing program could save their homes. Paul Mooney, who has lived in the same 12-apartment building near Dolores Park for the past 18 years, faces eviction under Ellis Law for the second time in three years.

â€œWe cannot afford to wait for the city to act,â€ he said. â€œHelp me and my neighbors stay in my building. “

JK Dineen, editor of Chronicle, contributed to this report.